I recently had the chance to check out the Dominican film “La Soga” (available on Netflix) Directed by Josh Cook and starring and written by Manny Perez.

When I went to Dominican Republic on February I heard about the movie pretty much as soon as I landed.  The first gas station we hit on the way to La Vega had bootleggers pushing the movie still that had been released in 2010.  When I asked my cousin what La Soga was about she replied “Some movie about a Drug dealer that lived here”…  And that was that.

The Actual plot of La Soga movie is a bit more complex than that.

The movie starts off with a chase scene in Santiago D.R.,  where the main character Luisito “La Soga” and his partner are in chase of a man, shotgun out, in plain sight of everyone amidst whispers of ”That’s La Soga”, to establish the legendary status this character had already developed.

When they catch said man, they confront him with some cocaine that belongs to him, and in front of everyone make an example of what gets done to people who dare sell drugs in that neighborhood.

You quickly realize La Soga is not a criminal, he is a hired gun, a bounty hunter if you will who works with the Police force in the Dominican Republic doing their dirty work behind the scenes.  You also quickly realize that La soga does not just chase any criminals, specifically what he is hired to do is to terminate Dominicans who have been deported back to their homeland due to crimes committed in the United states, and who are contaminating the area with drugs and crime.

The movie continues to explain how Luisito got to the place he is in now.

Communicating the story through flashbacks of when he was a young kid and saw his Father killed by drug dealers who were in his neighborhood from Washington Heights N.Y.  This hatred he grew for the drugs dealers made him an easy target to manipulate by the General, who gave Luisito as a child the opportunity to kill the cousin of the man who had killed his Father, promising to one day deliver to him the actual assassin himself, as long as he continued to do what they told him to. 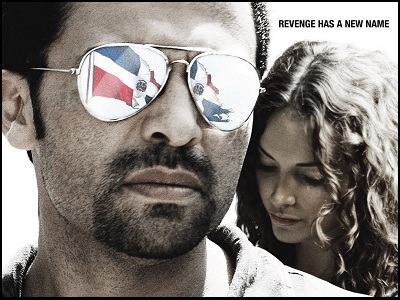 And thus the story goes, as he keeps on doing the dirty work his conscience starts to get in the way, and this is expanded when a childhood female friend returns to his life and gives him even more reason to want to leave that life behind.

Eventually Lusito does meet up with the killer of his Father face to face.  What happens then I won’t spoil for you, just know the plot thickens and some things that you think to be true aren’t what they appeared to be.

The writing of this movie is fantastic

The language is extremely authentic to the culture.  Towards the start of the film, Luisito as a child is getting teased for not wanting to kill a pig,  The kid ridicules Luisito in such a genuinely crafted Dominican style that it made me reminisce of my time growing up there.

There are a lot of visual cues and imagery used to prove points through-out the movie.  Some of the references are too subtle to catch on the  first pass, others a bit more pronounced like the use of pigs through the film to illustrate his first kill, and perhaps the loss of his innocence.  This theme follows the movie up to Luisito’s last kill, making  the connection from the start to the end.

The film has some famous cameos on it too that are fun to look-out Like Henry Santos from Aventura and Coco Cabrera from the radio station La Mega 97.9FM among others.  It was filmed in Washington Heights N.Y.  and Santiago D.R. near Manny Perez’s old neighborhood.  It’s a must see!