Alex Bueno and his band were performing in Azua in in Las patronales and shots were fired at the band due to some political statements made by Alex Bueno.

UPDATE: The video of this event including the gun-shots can be seen below.

The story goes that on the night of September 3rd while on stage where the security were supporters of Dominican political party PLD Alex screamed “Llego Papa”, or “Father is Here”.  “Llego Papa” is the theme slogan for current Candidate of the PRD (Dominican Revolutionary Party) and former president of the Dominican Republic Rafael Hipólito Mejía Domínguez.

Seems like someone got upset at the statement and threw water at Alex Bueno who then proceeded to say: 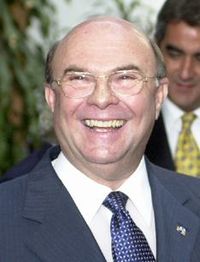 (Don’t throw water at me, throw water to those who don’t have any water because there are no water systems) alluding to the poor economic state that the republic is in.

From the reports of the witness, the crowd started chanting “LLEGO PAPA” and shots started ringing, the band quickly fled the stage and one of members was shot in the hand according to a close source of the band.  The band fled so quickly to the tour-bus that they lost sight of Alex and the manager amidst the confusion and the crowd.

We are happy to report that Alex Bueno later appeared unharmed and seemed to have been guarded by the same people who had attended the concert to see him perform live.

The only gun shot injury reported was to the the band member shot in the hand, however many others were harmed due to bottle/stone throwing that ensued amidst the commotion.  We wish a speedy recoveries to those hurt and are glad that Alex Bueno (Who has emerged healthy from past alcohol/drug abuse in recent years) continues to perform and do what we love him for the most, wonderful music!

Source: Live Witness Trusted by us who asked to remain un-named.