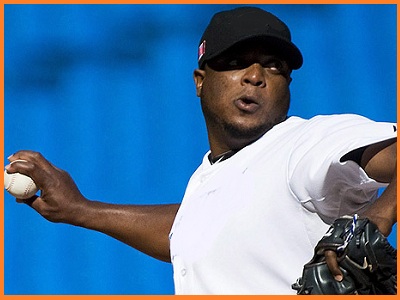 With spring Training right around the corner the New York Mets seem content on their current 40 man roster. The Mets have several questions marks; such as who will play second base and will Johan Santana pitch like an ace. The one spot where there is no question is who will pitch the 9th inning.

The man who manager Terry Collins has given that job to is Dominican Republic born Frank Francisco.

After the 2011 season had ended General Manager Sandy Alderson had said the bullpen was an area that needed much improvement. One area in particular was the closer, in 2011 Mets closers were responsible for blowing 24 saves(image what the 2011 season could have been if that number was cut in half). Alderson set out to find an establish closer and he found his man in Francisco, signing him to a two-year contract. No doubt that Francisco will have to pitch extremely well if the Mets plan on contending in 2012.

Francisco gives the Mets experience in the 9th and most importantly he gives them a closer with swing- and- miss stuff.

Francisco spent all of last season with the Toronto Blue Jays pitching in the powerhouse American League East; which lead him to a rollercoaster season. He struggled in the first half of the season going 10 for 14 in save opportunities. He was not fooling anyone with his pitches as batters hit .301 against him. Francisco’s earn run average (era) was an eye popping 5.92. It was because of these dreadful numbers he lost the closers job to now Mets Set-up man Jon Rauch. The second half of the season was filled with highs; as he was perfect in save opportunities going 7 for 7. Battlers only hit .188 against him. He pitched to a 1.37 era in the second half. The Mets hope this is the Frank Francisco they signed.

So what did the Mets get when they signed Frank Francisco to a two year contract? They got a hard thrower who attacks the strike zone. He is fearless on the mound. Francisco has been one of the better power relievers in the game over the past few years. For the most part he keeps men off the bases; which is what a closer is suppose to do. He gives the Mets credibility in a much improved National League East. He gives the fans a reason to watch their 50th Anniversary season.

I would like to take this opportunity to personally thank the Mets organization, in particular the Mets Public Relations department. This is my third article I have written about a Mets player, and each time they have giving me encouragement! This has meant a lot to me because I have been a fan of the Mets since I could remember, and for them to knowledge my work is amazing to me.