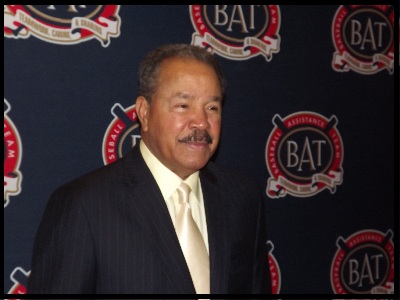 On January 24, 2012, Baseball Assistance Team (B.A.T.) held its 23rd Annual “Going to Bat for B.A.T.” Fundraising Dinner at the New York Marriot Marquis Hotel, in Times Square. The event was to raise money to assist members of the baseball family who have fallen on hard times. This year, B.A.T. is celebrating the 50th Anniversary season of the New York Mets. The event was attended by over 50 current and former players. One of the former players to attend was Juan Marichal.

Juan Marichal was born in the Dominican Republic on October 20th 1937.

He made his Major League debut at age 21 with the San Francisco Giants. He played part of 16 seasons; which he played 14 of them with the Giants. At the age of six he started to play baseball, and quickly decided to become a pitcher. It was at this time he developed the high leg kick that was to become his trademark. Marichal signed his first professional contract with the National League San Francisco Giants in 1957

At age 21 he pitched his first Major League game against the Philadelphia Phillies, and made a very special first impression. He struck out the first two batters to face him. He did not allow a single base runner until two outs in the eighth inning. Clay Dalrymple, the catcher for the Phillies, singled to left field to break up the perfect game. Marichal pitched a complete game striking out twelve. This was only a glimpse of what was to come.

During his time with the Giants, he had six seasons in which he won more than 20 games. He compiled a career record of 243 wins, 142 losses, a winning percentage of .631, and an earned run average (E.R.A.) of 2.89. Marichal completed an eye popping 244 complete games and 52 shut outs. He finished his great career with a team that he dominated, the Los Angeles Dodgers. He won 37 of the 55 decisions. He was inducted into the Baseball Hall of Fame in 1983 becoming the first Dominican born player elected. The Giants retired his number 27. He now is one of the 15 members of the National Baseball Hall of Fame Veterans Committee. In the 1990’s he served as Minister of Sports for the Dominican government. He currently resides in Santo Domingo, Dominican Republic.

If you would like to learn more about the Baseball Assistance Team please visit them online at www.BaseballAssistanceTeam.com