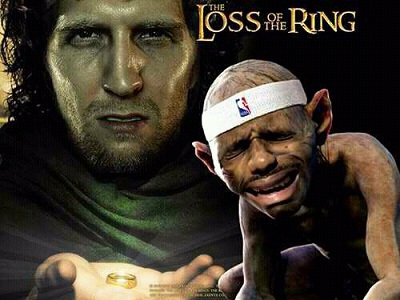 Forget if this is Dominican or not, this is big. For all that has been expected of King James in his career a championship just did not seem to be in the cards for this young man once again.

He left Cleveland in what seemed to be the biggest spectacle of the decade in Basketball news, taking with him the hopes of the cavaliers ever winning anything, ever again, yes I said it, sue me… (Don’t really sue me I love Ohio)

But among the hate that came from his former home-town and the place that made him a star, was the other side of the coin that figured that with talents that he was now going to be surrounded with while playing for the Miami Heat, that perhaps this would garnish King James the ring he has been after, but alas on Sunday the 12th, of 2011 this victory would not be. And among tears of joy and pain the “Loss of the Ring” was to be for Miami.

James Dirk, and the Dallas Mavericks’ 105-95 victory in Game 6 is no longer a dream, but a reality, and James feels like this is personal, stating that the loss felt like a “personal failure” but also said “it hurts of course, but I’m not going to hang my head low”.

The two time league MVP along with superstars Dwayne Wade and Chris Bosh were not enough to defeat the veterans in the Dallas team, and while the games in the finals always seemed to be close, in the end close was not close enough to push for a game 7 or a win.

We are sure that eventually with that much talent Miami will take the ring, however for now, the bells are ringing with the sound of “You can’t buy a championship Ring”.