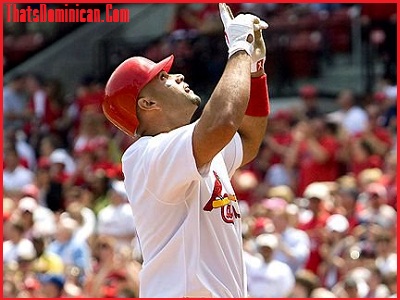 Is perhaps one of the most followed players in baseball today, just so happens he is also … wait for it.. wait for it.. Dominican!

Thus far his career has been playing for the St. Louis Cardinals as a first baseman, and at 6’3″ considered to be one of the best players in the game today. Aside from being one of the best well-rounded players, I include him in this list due to his overall nice guy personality as well as his giving along with his wife to various charities. Albert has the www.pujolsfamilyfoundation.org, since 2005 Albert and his family have been donating to children with down syndrome.

According to a poll of all 30 MLB managers in 2008 Pujols was named one of the most feared players in the game:

Albert Pujols career is sure to be put down in the record books, and we are thankful to have him as a proud representative of the Dominican culture.

Interview with Alber Pujols – Talks about his relationship with Christ, giving his life over to him and how he is blessed to be able to play the game. Speaks about his humble youths into where he is today, meeting his wife at 16 and how she introduced him to GOD. check out this humble man, makes me proud to be Dominican!

In part 2 of this interview Albert Pujols keeps speaking about his favorite passages int he bible and what he takes away from that learning. He speaks about how his past before Christ does not matter, “what matters is what he does now from the time you give yourself to GOD”. – Albert Pujols