She is the beauty pageant title-holder crowned Miss Dominican Republic 2011 and will represent the Republic in the 2011 Miss Universe pageant.

Dalia Fernandez competed as the representative of Santiago March 8th, 2011. When crowned, she was booed’ by the crowd who were in support of the runner up instead, even rummors of having “bought” the crown for a bit over $100,000 u.s. started circulating due to her aquaintance with panel representatives and frequent dinners and outings with them.

Despite this, Dalia Fernandez  is considered the legitimate winner and will be representing the Dominican 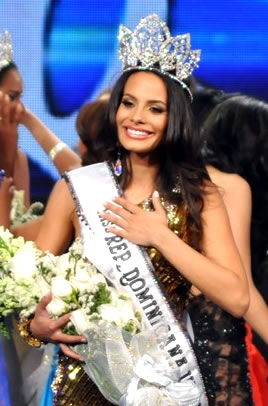 Republic in the year 2011 in the Miss Universe.

Dalia is currently studying to get her bachelor’s degree in psychology.

(EDIT) I have been informed that the a case is being filed against Dalia that will be going to court on the alleged accusations that she retains the title illegitimately.

In 2011 Fernández competed in Reina Mundial del Banano 2009 in Machala, Ecuador on September 23, 2009. As the eventual first runner-up of the event, she won a crown made of 500 green pearls, tourmaline gem stones, and 700 crystals in silver finish.

Despite having troubles or say argument on how she got the crown, we here at ThatsDominican.com award her with the special award of being our Dominican Hot girl of the month for April of 2011…

And believe us when we say, we did not get $100,000, or even 1 dollar, we just think she is beautiful, and as you can tell in the picture in the right she is very thankful for that