While having extremely great success as part of the Bachata Group Aventura, the members have since dispursed to follow their own paths in the field of music, not ruling out an Aventura reunion in the future.

In a recent interview where he talks about his future CD, Romeo Santos (lead singer of Aventura) stated that he never thought about going solo until he heard other members of the band talking about doing their own thing. And since even Henry went solo, there may have been some truth to that. 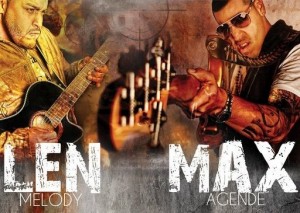 Lenny (Len Melody as he is also known), has been busy behind the scenes with his own label as well as has produced many tracks for artists Like Aventura, El Jeffrey, Huey Dumbar and his own artists Huellas Del Tiempo and Chayanne Y Su grupo Silencio, Max Agende (now his partner) and many others. He was Born in New York, the Bronx, October 24th, 1979 and has been in love with music since the age of 15.  He won the Hispanic Choice Living Legend Award in 2011 for his contribution to the Urban Bachata genre.

I imagine the route D’Element will take would be similar production style that Aventura has mixed with a bit more of a hip-hop swag thanks to Max’s own love for rap music. Lets see where this goes, we are excited to see the result of these two talents mixing together!

Max Agende is also working on his own project called “MaxMusick Vol 1” geared towards hip-hop fans, his first single is “Te Extraño”, check out more info on Max and his project here: Max (Mike Santos) Agende – Video for Te Extraño

UPDATE: As of October 2011 Steve Styles from the group XTREME has been added to the group for their release “VENA : D’Element Project”