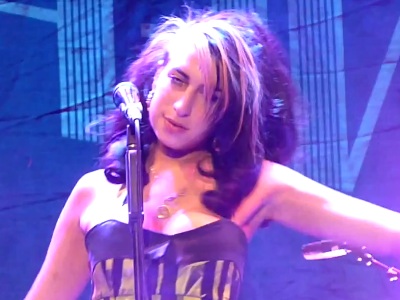 They said she needs to go to Rehab and she said “no, no, no”…And then this seems to be the end result of that hit song that I guess put her in a place musically where she can do what she did in the following video, a performance later called “the worst in history of Belgrade” by newspaper Blic.

Where I take it that whoever writes the blog attended Amy Winehouse’ concert and then recoded the shameful event as she was on stage seemingly drugged up/drunk/high/low or who the hell else knows. The show took place in Belgrade just recently, where the people seem to be way more accepting of seeing a crackhead, oops, an alleged crackhead on stage than most countries would be.

I would say “Hey don’t make fun of her”, but this is ridiculous, someone needs to strap her down to a bed and take away all her rights for her own good, feed her trough a straw nothing but vitamins and soap after a year let her free and see what happens, at this rate her being alive is just mind bending…

The crowd cheers her on as the band laughs at her antics, as she stumbles and trips on-stage in what many on the youtube comments are calling “encouraging behavior”. To the crowds defence as well as the bands, she already told you she ain’t going to rehab, meaning someone must have tried to get here there at some point.

Here I am worrying about how much I drink, this makes me feel much better, pass me a presidente some Rum and a little vile of crack, we a breathing super-humans now a days.