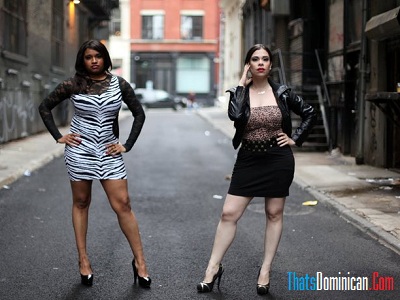 I mean they call themselves “Las Primeras Damas De La Bachata Urbana” or Urban Bachata’s First Female Group, and the title itself makes you think, “is there really no other female groups of the new style Bachata pioneered by Aventura/Toby Love and the likes?” Then you let the clock tick, and you realize, they are right.

While you have had some male/female duos that have been successful like “Carlos Y alejandra”, even looking back at traditional bachata women have pretty much been left out of the genre altogether. I imagine since bachata has long been consired la musica del amargue and mainly played while guys got drunk at bars crying over their women that a woman singing would not aid in their sorrow, but this new style of bachata is looking to change that image of what Bachata music is.

Sure Milly quezada and a few others dabbled in a few songs here and there but their main forte was always merengue styled music, well, for those longing to hear what a duo of females in bachata sound like I present to you GIRLZ TALK.

The group members are Judy Santos & Marlyn Jimenez, and while the group itself only formed in 2008, they already have been doing their own thing individually before that. The female vocals in Aventura’s hit song “Obsesión” were actually done by the groups very own Judy Santos, she went on to also do vocals for “Angelito” and “La Guerra”.

Now stay with me, this is new talent, already cosigned by Mr. Toby Love (an honorary Dominican) and who have already performed with Aventuras Max and Lenny (D’element) but is it going anywhere? Too early to tell, but I do see one thing, they are working hard and chasing what they love, so from us at ThatsDominican.Com, we are rooting for ya’!

I know this song is old, and this is not their newest material, ask me if I care? Go Ahead ask me? This goes hard!