Jack Veneno
is perhaps one of the most known figures in the world of wrestling in the Dominican Republic.

Veneno’s real name is Rafael Sanchez and he was birthed in San JosÃ© de Ocoa, Dominican Republic. He is known for the many years he worked on Colorvision channel 9 from 1970′s all the way to the 90′s on the Dominican Wresling network called Lucha Libre Internacional.

He first got into wrestling by watching movies he and his friends would get from Mexico, and watching their big named stars and later practicing the same moves they saw on TV, in the ring once the then Dominican Wrestlers were done. He was part of a group of friends who would later also become wrestlers.

His name came (as he tells it in the interview video below), from a book he was reading. Jack states he was a big reader at the time he started doing wrestling, and one of the characters of the book he was reading was called “Jack El Veneno”, or The Venom Jack. He took off the “El” part of the name and stuck with Jack Veneno.

He was the main star of the show as well as the owner of the production company Dominicana de Espectaculos. He is also a former NWA World Heavwyweight Champion, although his title reign is not officially

recognized by the NWA.

He was endorced by many products that had success greatly due to his promotion while wrestling, Forty-Malt and Salami Mayita are amongst the most notable ones.

While not as popular outside of the Dominican Republic, one of his fights did cross over into world history. His win over Ric Flair for the NWA title is still dabated even today, Flair says he had to let Veneno win as he felt threatened by the Dominican military.

A documentary about Veneno was being pitched a while back called “Jack” but never materialized. 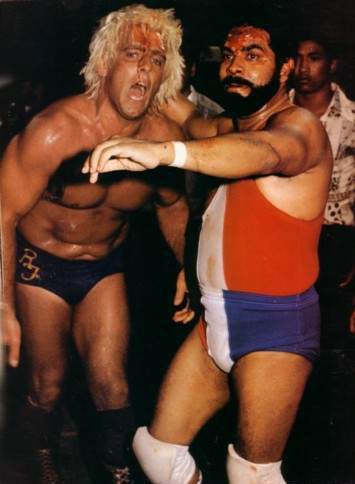 While he is retired from the wrestling world, he is currently an aspiring politician. He ran for Mayor of Santo Domingo, on the 2006 Congressional and Municipal Elections. He was not highly favored to win, but he won the election in my heart. Seriously, the run gave way to countless Jack Veneno posters, including a fake one featuring Juan Luis Guerra as his running mate.

Veneno is a candidate for the BISD party, a political party founded in 1989 by the late Dominican politician JosÃ© Francisco PeÃ±a GÃ³mez, who died in 1998. The BISD party received approximately 100,000 votes in the last presidential election in 2004, in a country of 8,950,000 people, 3.613 million voted in total.

while running for post, his promotional material would have his stage name “JACK VENENO” instead of his real name to try to attract the vote of the people who had once seen him while he was wrestling. He served as national Sub-Secretary of Sports of the Dominican Republic from 2007 to 2008.