Miguel Tió, a native of the Dominican Republic, began his painting studies with the artist Elias Delgado while also attending the “Escuela Nacional de Bellas Artes” in Santo Domingo.

His interest in Publicity and Graphic Design led him into continuing studies at the “Universidad Autonoma de Santo Domingo”. He worked as in-house draftsman and sketch artist for “Teleantillas TV” and as an illustrator for the “Secretaria de Estado y Educacion, Bellas Artes y Culto” in his native Dominican Republic.

Izquierdo Studio, where worked as a painter and silk screener for a variety of projects such as the feature films Spiderman 1 & 2, and The Woods: the Broadway shows Beauty and the Beast, The Scarlet Pimpernel, Rent, Miss Saigon: the operas Four Saint in Three Acts, Madame Butterfly; commercials for Hershey’s Kit Kat, Old Navy; window displays: for Wathne, Polo/Ralph Lauren, Victoria‘s Secret, Nautica and special events such as Bette Midler’s fundraising galas Hoolaween I and II at the Waldorf Astoria Hotel.  He has also worked with Heidi Pettee Designs, Inc., New York 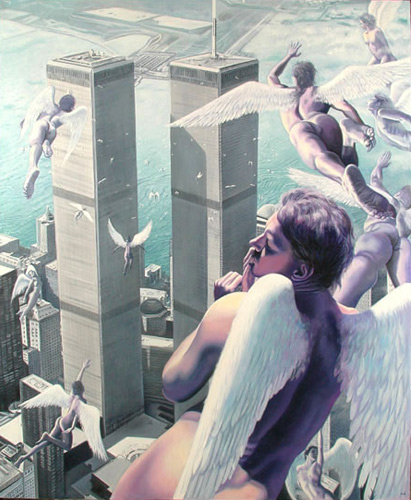 As head painter for displays and a mural for Richard Leeds International and Rosie Magazine’s feature story.

He also worked for the Warner Brothers flagship store in New York City as a head painter and craft specialist for a variety of in-store and window displays including Harry Potter, voted as one of the top ten Christmas windows in the year 2000 by the New York Post.

Since 2005 he works as an art teacher for Studio in a School and in 2006 he studied the ancient technique from the renaissance, “The Mische Technique” with the very well known artist and founder of the Society for Art of the Imagination, Brigid Marlin.

His works have been exhibited in solo and group shows in The Dominican Republic, The United States, England, Denmark, Germany, Italy, Cyprus and Japan. Some of the group shows in which he has participated are: “Sacred Art”, Lofthouse Gallery, Wessobrunn, Germany. “Flights of Imagination”, The Brick Lane gallery, London, England. “JAALA 2008 Exhibition at The Metropolitan Museum of Art. Tokyo, Japan; “The Society for Art of The Imagination”, Associazione Sassetti Cultura, Milan, Italy; “In This Life”, Reflections on War & Politics, at The Museum of Contemporary Art (MOCA), Fort Collins, Colorado; “Artexpo New York” at the Jacob Javitts Center.

The most recent of his six solo shows was “MIGUEL TIO: Artist in Residence” at the Gallery.at Madigan Library in the Pennsylvania College of Technology, Williamsport, PA.

In 2008 traveled to North Cyprus invited by the municipality of Kyrenia to participate in a workshop and exhibition for the Olive Tree Festival in Girne.

In 2010 he was nominated and selected as the recipient of the 2010 “EL Awards” a recognition given annually by El Diario La Prensa to the most outstanding Latino men in the tri-state area.

In 2011 was invited by TellUsArt organization to participate in “Keep Our Planet Alive” a workshop and exhibitions in Dharampur , Himachal Pradesh and New Delhi in India.

He has been commissioned to paint various portraits, among them a portrait of Diane Von Fustenberg, which was used for her fashion show on 2002, and the portrait of Walt Whitman commissioned by the collector Ed Centeno. His images have been used as book illustrations and covers in different publications, among them: Young Walt Whitman was used in the Spring 2010 issue of Lapham`s Quarterly, Art & Letters, 8:30 AM for “Anthologie Litteraire’ published by Beauchemin in Quebec. “Homage for an Unknown Artist” for the cover of the novel “El precio de los sueños” by Enrique Garcia and “Steven” for the cover of “Coloris Corpus” Published in France by CNRS Editions.

Miguel Tió currently has a studio in Manhattan where he keeps producing new works.