There are but a handful of young, solo artists who dare to tackle the challenge of performing bachata music at the international level. There are fewer still who embody the charisma and talent to make the genre their own, in a way that nobody has before.

Royce’s rendition of “Stand By Me” became the first bachata song ever to be played on mainstream (Pop and R&B) radio in the United States. The video of the song has been viewed more than five million times on YouTube alone. This, in addition to remaining on the top of the Latin Charts on Billboard and iTunes for many consecutive weeks and being asked to perform on the most highly-rated Latin TV programs and award shows, has made the 21 year old the top new solo artist in the industry. 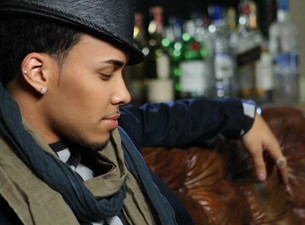 Geoffrey Royce Rojas was born and raised in the Bronx, New York into a humble but very close-knit family. He credits his drive and determination as well his positive attitude to the influence of his parents.

“My mom had also dreamt of being a singer when she was young, so she was supportive from the very beginning, and together with my dad, they instilled in me that with hard work, persistence and focus I could achieve anything. . . Music has always driven me and kept me happy so it was easy to stay focused, positive and away from any negative distractions,” he states.

His initial exposure to bachata also came from his parents, who are both from the land of the bachata, the Dominican Republic. “They always instilled a strong sense of cultural identity and pride so I grew up listening to what all the other young people were into, hip hop, R&B, and pop, but also really loving bachata,” he explains. “I just never expected that I would ultimately launch my career within that genre.”

His experience as a performer started in grade school where he starred in talent shows and plays, and immediately felt comfortable on stage. “I liked the feeling of being able to portray any role in front of a lot of people,” he explains. And while he excelled at acting and dancing, he says his whole world truly opened up when he began to sing, “It felt so natural and free, I suddenly could portray any emotion through the music, it felt that what I could achieve was unlimited.”

At 13 he discovered a new “hobby” that occupied all of his time, fueling his inspiration and bringing him closer to his ultimate goal. “I began writing poetry and eventually songs, inspired by the personal experiences and issues that affect me and my generation,” he recalls.

For the next few years he spent all his spare time experimenting and creating his music, spending any money he earned on studio time and musicians. The Hip Hop and R&B tracks he composed were good but it was not until he was asked to sing a few bachata songs to judge his quality as a performer that he realized exactly how he wanted to break into the music world.

It all suddenly made sense to Royce. Drawing from his experiences and influences, as well as the musical styles he loved, he would create his own brand of bachata.

“It wasn’t a total surprise because I knew that at some point I would enjoy performing traditional Dominican music, it just had not occurred to me as my first choice, but I am so thrilled that it happened this way,” he says.

Still, he promises that what will set him apart will “not be purely bachata,” but rather more of an urban experience within the tropical genre. “I want to take bachata to another level, adding different elements to modernize it and make it more relevant to young people, while also maintaining a respect for the traditional sound I grew up loving”, he says.

So how did Geoffrey Royce become Prince Royce? “I had a MySpace site and just ‘Royce’ didn’t seem impactful enough as a title, so I thought I would come up with a catchier name, I knew that ‘Royce’ means ‘the king’s son’, or someone of royal birth, so I started going by ‘Prince Royce’ and the fans loved it so it stuck.” he recalls. “But please do not think I believe the hype! My feet are firmly planted on the ground,” he emphasizes.

Nevertheless, the youngster has been blessed by landing in some of the best hands in the Latin music industry. After visiting several labels that passed on him, Royce met with renowned producer and Top Stop Music label President Sergio George who automatically understood his potential and signed him to the independent label.

Prince Royce was then joined in the recording studio by a select team of industry experts that sealed the production of his album with utmost care and professionalism. “This was an incredible experience for me and I felt very excited to see the entire project come together to perfection with each recording”, says Royce with a look of satisfaction. “The feeling of reliability and trust that comes from knowing you have the best team on your side when you are fighting for your dreams is priceless.”

Well on his way to fulfilling his dreams, Prince Royce says that one of his missions in life is to encourage others to do the same.

“I hope to inspire many young people to always remain positive and strive for their dreams. I want to be the kind of artist that is able to touch people’s hearts through my lyrics, so that before I leave this world I am able to make a positive difference the lives of others”.

Prince Royce’s creative fusion of styles, melodious voice and charisma, added to his steady tenacity, will ensure that this talented young man continue to take the music world by storm, earning international recognition and allowing him to make a mark on his generation.

“I hope to touch many Hearts through my music” – Royce