Mamajuana is a Dominican mixture of herbs and liquor said to do everything from heal, to increase sexual potency to… Wait let me just get my bottle and read.. Ehem…

“ADD RUM OR WINE AND BEE HONEY, LET IT REST FOR A FEW DAYS, THEN DRINK IN SHOOTER GLASS.  INCREASE THE VIGOR SEXUAL”

Let that sink in for a minute, yes, I quoted that from the actual bottle.  To be fair, I did buy it in the Dominican Republic.  One thing is for sure, that it will get you drunk.

The basic mixture after curing the herbs (do this by adding cheap rum to the mix let it sit, then throw out the rum, this will take away some of the harsh wood flavor you get at first, depending on where you buy it, it will usually be already cured) is to prepare it by mixing Rum, wine, honey, cinnamon sticks, raisins and lime to taste with the now cured herbs and let it sit for minimum 2 weeks, then serve straight. A Real Dominican should always have at least an empty bottle around, its in the “How to be Dominican Booklet” they give you at birth. 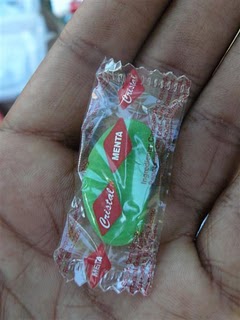 I clearly remember as a youth, buying these for 50 cheles, well I don’t recall the price but that seems right.  What this is, are Cristal brand mints (Mentas Verdes Cristal pictured on the left), or as they are better known “Mentas de Guardia”, mashed up together and sold like that… Mashed… And called “Papamentos”.

I don’t know the real story behind how that was started, but I can make one up for this sites sake, so lets go!

One day, a huge giant shipment of these mints was being shipped to La Vega, Dominican Republic and a guy ran in the middle of the road to pick up a Chancleta (flip-flop) that fell from his left foot.  The truck carrying the mints was unable to stop and flipped over trying to avoid the crash in the process emptying all the mints all over the highway.  Other cars soon kept moving trough the highway and ended up crushing the mints some which stuck together due to the high heat of the road.

Later on that night, an old man named Amento Jose Rodriguez De La Cruz Junior while crossing the street saw all the crushed mints and thought it would be a waste to leave them there, he brought them all home and said this to his kids “Look what Papa ‘Mento brought you!”… The kids loved it, and from there on the legend of the crushed mints grew!

That was kinda cool

Even I believe it. 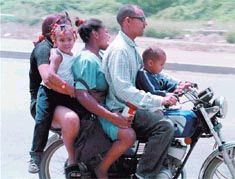 Really to understand this, you must first understand the island itself and its economics.  While in the U.S. Motorcycles are mainly used as secondary vehicles, or as a pass-time fun thing to do, in Dominican Republic where the average house-hold income is less than $9,000( according to caribbean-guide.info) it just makes it more reasonable to believe that their primary form of transportation are motorcycles (cheaper, more fuel efficient, and the weather permits their use all year round).

Armed with this knowledge, it can also be assumed, that being the inventive people we are, we have adapted the motorcycles to be anything and everything, from U-Haul Trucks to Taxis.  Motorcycle Taxis are called “Motoconchos”, Concho (taxi) Moto (for motor).

Have you ever been to a theme-park where the ride was so scary that you really thought you were going to die?  If you want to out-do that feeling with a small chance of actually perishing take one of these motor-taxi’s and hold on tight.  It is very common to see a whole family in a motorcycle, plus their dog, and some chickens, it is an experience.

Now I don’t expect anyone to really think this thing works, but as a kid it was pushed hard on the T.V. most famously by Dominican Wrestling Super Star JACK VENENO.  It’s supposed to be some kind of multi-vitamin that would help you grow to be as strong as Mr. Veneno and the commercial I clearly remember was him flexing his arm, then the picture would fade into the arm shown in the bottle.  Haha I tried to find it online, but have not been able to.  Maybe you can help!

The Product was simply Liver oil in Vitamins A and D with omega-3 Fatty Acids, said to do everything from lower cholesterol to make your bones stronger specially in growing kids.  I know where to get it in New York, and plan to buy a few and offer it to some of my readers just for the fun of it haha.  The taste is that of thick molasses if you have ever had it, and it looks just like it as well, real thick dark brown color and consistency, a must in all Dominican households, if not for what it claims to do for the fun of it

The origin of this is actually kind of creepy, but like all good Dominicans we found a way to make it fun.  The “Diablo Cojuelo” or loosely translated “Hopping Devil” is said to be be one of the first Angels to fall from the grace of heaven.  When he landed in hell, other wrong do-ers landed ontop of him injuring him thus the name came to be.

The creature is taken as a representation of part of our culture due to the demon calling himself the inventor of satirical comedy, horse-playing, and funny pranks and dance, all very apropos for the Dominican culture.

These “Devils” are represented by the hundreds in the feasts had in Dominican Republic for independence day the 27th of Feruary and the previous weeks feasts leading up to the event.  I remember my Father taking my brother and I to those feasts, its something great to see if you ever want your mind to be blown, it is held in La Vega Dominican republic and well worth it if you plan to Dominican Republic Vacations.  Fair warning, they walk around with socks full of more socks and sometimes harder objects(nothing lethal)  just hitting people usually in their butts, hence the “Prank” part of these Devils.

Leave a comment below, tell us what else we should add!