Making this article about the top 10 dishes in the Dominican Republic has certainly made me gain 4 pounds at least, as I could not resist but to venture out and get me some home cooking after writing it.  While the Dominican culture has many tricks up its sleeves when it comes to food, certain things are just universally a must in any REAL Dominicans bag of cooking tricks, here I give you the top 10 foods that all Dominicans know about, as well as should know how to make, along with some dominican republic recipes. if you get a chance to ever eat at a Dominican Restaurant, these foods are a great place to start.  Enjoy!

Oh and its all downhill from here panita (friend), as sancocho is the end all be all of the Dominican culture, this right here is what turns enemies into friends, friends into closer friends, and cousins into lovers… wait what?  Never-mind that part.

I pride myself in being a great cook, and have never attempted to make this, it a great undertaking to make usually in large quantities as everyone you know will want some.  It was the center of many a family gatherings when I lived in the Dominican Republic and the reason for many feasts in my youth.  Now living in the United States, it is not as often as we get to enjoy this wonderful meal, so when the time comes it makes the event even that much more special.  Serve it with rice and avocados and BAM, got yourself heaven.

Here is a link to the recipe for this, if you make it please let me know how it turned out.   P.S. we are not affiliated to this site, nor make claims to anything they offer, but we do like their focus on the island and culture!  We make love not war over here

If there was ever a snack like finger food that I could eat every single day of my life, this would be it.  I mean every single day, ever.  I have also not tried to make this, but I do plan on it soon as it is something that after making you can freeze and simply drop on a deep fryer or over when you are ready to enjoy nirvana.  Its origins are actually middle eastern, who after migrating to the Dominican Republic brought along this wonderful food with them and it is now part of our culture.  Also known as Kibbe or Kibbeh.

For the actual ingredients ect just check out the link I will give in a second, but for my description of it in a non-scientific way read this:  Brown crispy outside with the inside filled with meat-ness good-ness-ness sometimes with a hint of spice and sweet in the form of raisins or perhaps olives that once ingested into your stomach cavity will spark visions not unlike those had by people who almost die but don’t… wait what?  disregard that as well.  It’s a great snack, and here is how to make it (again I am not affiliated with this other site or take credit for their work): KIPE RECIPE

Just about every culture has some kind of their own version of this, some make it sweet some spicy some stuff the flour shell with vegetarian filling some with beef/meat/ and so on.  If I were to try to make you all understand it, its a sealed up taco in a hard shell, sorta, kinda, and my second favorite finger food (when made small) and even meal when made huge.

I am very experienced in this, and hell if you search on YouTube “Dominican empanadas” my video comes out number 1 or 2.

Its basically fried dough with stuffing in it, for our culture usually chicken or beef with cheese, or cheese alone.  When done right, they do take a bit of time to make, if anyone makes you these from scratch, they love you vewwy vewwy much, although due to the popularity of the product they are even sold frozen, so all you have to do is throw it in the oven or hot oil to fry to make them, there is nothing like the home made stuff.  Check out my recipe here: Manny’s Empanada Recipe

Oh man, this is just about as Dominican as you can get, often a breakfast dish but it can be enjoyed just about whenever.  I’ve heard stories about this being one of those badly pronounced words that came from English.  In the 1916 invasion of the U.S. in Dominican Republic it is said that when served the dish the U.S. people would say “Man this good” shortened to “man good” and then Mangu, however I’m not going back in time to find out if this is an actual fact.

What I do know, is that this is boiled plantains mashed along with some of the water that it was boiled in and then topped up with a combination or either of these alone, onions, oil, fried cheese, fried salami, fried or scrambled eggs.  Very simple to make, not much science to it so no need to give links, just look at the picture and go make it.

Yes, plantains again, may seem like perhaps this is a repeat, but no my friend!  Plantains (just like eggs) when made differently taste like a whole nother’ (another) monster!  And plantains are just about the most related with the Dominican culture, hell I used to wear a plantain chain, and I’m not even making this up!

So whats different between Mangu and tostones?  Well for one, Mangu is boiled then mashed, tostones are fried, mashed, then re-fried, and served usually as a side dish, whereas Mangu can be served as a main dish.  If you go to any Dominican Restaurant that’s worth anything at all they will have it, in Washington Heights N.Y. (where a large population is Dominican) even Chinese restaurants have made it a point to carry them in order to please their customer base. 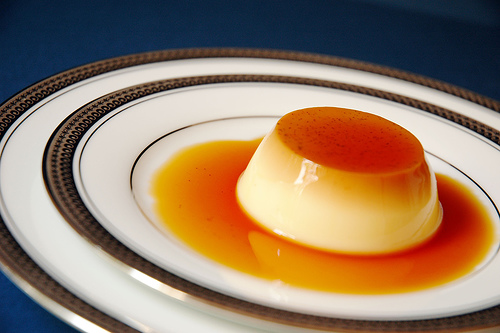 El pipo loco I took it there, if you don’t know what “EL PIPO” means go check out the DOMINICAN LINGO page, but really yes, this makes it in!

Flan is a dessert, caramel like in color and taste whose flavor is starting to spread out, now you can get flan flavored ice-cream even, the nerve!  While I won’t lie, I personally would take a “Tres Leches” cake to flan any day, this dish is widely popular when it comes to the Dominican culture.

Check out the recipe of how to make this widely enjoyed dessert. FLAN RECIPE

These are the basic components needed in a full Dominican meal, “arroz, habichuelas y carne” (Rice, Beans, and meat) are typically called “La Bandera” (The flag) as my friend Carolina was so kind to point out, due to how relatable it is to out culture and very foundation just as the Dominican Republic Flag is.   While this may not seem like something only made for the Dominican Community, this is something that we all live by, and that is part of the Dominican culture.

Rice and beans, the name alone say “Latin“, add meat to it and what else do you need?  You got your carbs in the rice, you got the fat and the protein in the chicken, and then you got the fiber in the beans, its like…. umm… perfect!  You could literally live off of this stuff, no exaggeration, perhaps this is why it’s a part of the Dominican staples when it comes to meals.  To cook, there isn’t much of a recipe, since all you have to do is put these items together, so I won’t link you anywhere, again, look at the picture and just make it!

Now I do wanna say that they make this from both pork and chicken, but I am speaking about the pork king, because that’s the more famous one.  Now picture this, you take a chunk of pork, with its skin, and throw it into salt water with oil and let it become as crunchy as it can be without becoming charcoal, and then enjoy it… Does that not equal heaven?  By the Way that’s my Dad in that picture.

Usually served with some side, be it plantains or yuca oR alone with JUST lime (serves as a grease cutter) this can be found in Dominican Republic corners with very much disregard to safety of the consumption of it.  Here int he U.S. they tell you “hey pork builds up a lot of bacteria if you leave it out and yadda yar“, in Dominican Republic they literally leave it out in the sun to keep it warm and serve it to you just like that, and let me tell you, as of 2011, my grandma is alive in Dominican republic and shes in her late 90′s, so to you Americans I say PSHHH!!!.. Whatever!

Ay Dio Mio! Estilo Alex Bueno, this is chicken done with flavor, super flavor, and the left over sauce can be sprinkled onto the rice you serve it with to make it even more yummy.

The term itself translates to something like a chicken stew, so guisado can be anything from chicken, to beef, to fish, but for what we are trying to do we shall stick to chicken on this one.   As you may have guessed, it is usually served with rice and beans, with the rice drenched in the sauce that comes from the chickens stew itself, it is a must not miss in my book. This must have been a mistake, something this good is not made, it’s born!  I remember when I was young the concon was left for the elders, my Father, my uncles, the men- men, got the con-con.

Con-con or Rapado (rapao) as it is known in some other cultures, is the burned rice that is left on the bottom of the rice pan when it is cooked, usually retaining the most oil and the most flavor, and usually consisting of only one layer of rice, it is prized because of its scarcity.   Whenever I am offered concon in a home, I feel like i’ve made it.  As far as recipe for this, there is none, just put your rice in a conventional pot, with oil, and let the bottom burn a bit, then scrape it off and serve alone or along with the regular rice and beans  = win.

And that concludes our list!  You don’t agree?  Let us know in the bottom here what you would have liked to see!

While the list could only be 10 of the best Dominican Foods ever, our cooking is very extensive and there are many more things that I would have liked to add, alas, ten is diez, but here are some other foods that perhaps you may want to check out if you enjoyed the list, all kings in their own right.

Chimichurry (Not the Sauce, but our version of a burger): Usually found in Grease Trucks, I love them.

Yucca con Cebolla (Cassava with onions): Served as a side.

Platanos Maduros or Maduros (Sweet Fried Plantains):Served as a side dish, not unlike Tostones.

Habichuelas Con Dulce (Sweet Cream with Beans): Serve these with some of those round little cookies for a win!

Asopado (Stew): Its like a soup with rice and meat in it, beautiful.

Pernil (Roasted Pork): I wanted so bad to put this on the top 10, like so bad, may have to replace one of the above for this.

Suspiro (Meringue): Hey, had to throw in a little sweet, check this meringue recipe out,  How to make Meringue