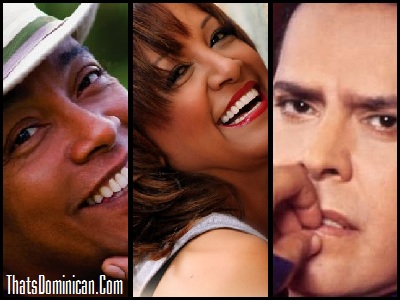 Oh yeah estilo Kool-Aid Man we present the list of the top 10 Merengue songs of ALL time!  Welcome to Merengue music heaven!

Sit tight for your enjoyment the best of the best, cream of the crop and all that when it comes to Dominican Republics foremost known music genre, the Merengue!  This list was composed out of entries from our face-book fan-page http://www.facebook.com/thatsdominican, join us and be part of future discussions!

Agree?  Disagree?  Let us know below in a comment!

At the top of the Top 10 Merengue songs of all time list, we start with the merengue song that I want people to play at my funeral.

“El Jardinero” by Wilfrido Vargas. Every time this song comes on a big smile comes on my face, and I want to get up and dance! That feeling if I could capture it, that joy would be what I want people to remember when I leave this Earth!

The song (For those non-English speaking) basically speaks of this gardener who tries to win the heart of his love by planting different flowers for her in his garden, and telling her of how he will make her fall for him eventually. The song breaks up into a horribly mispronounced English rap that just ads to the coolness of this song. El Jardinero by Wilfrido Vargas is a must on any Merengue music lovers list, and belongs in anyone’s top merengue list of all times.

Moving right along we got a hit from Alex Bueno, “el hombre mas afinado de el mundo” as he is called, due to his phenomenal voice and being known to always sing well live. There are stories that have been collaborated by Alex himself, that he has gone into the studio and recorded full songs in one take.

The song we are talking about for this list, is his famous hit “Colegiala”. The great Fernando Villalona once said in an interview that as an artist, the first time he felt his career threatened was when Alex Bueno released this Merengue. Because of this, Colegiala from Alex Bueno earns a spot in the top ten list of Merengue songs of all times! Enjoy.

Oh we gonna hit you with one of those anthem songs in the Latin music world when it comes to merengues, for your consideration the song by Rasputin “Oye – abre tus ojos”. The song goes through many mundane parts of life, and tells the listener to open their eyes and enjoy the wonderful things life has to offer. Amidst huge trumpet sounds and upbeat carnival sounds this track for sure belongs in the best Merengue songs list!

This one was a little tricky, Sergio Vargas is for sure of the top 5 merengue singers in the Dominican Republic and has many hits under his belt some of my favorites include “Madre mia”, “La ventanita” and “Dile” all tracks that could just as well be here in this very list. However when you talk about that era of merengue where so many great music came from, for “La Quiero a morir” to hit as hard as it did means a hell of a lot. He has had greater hits, but to keep it as pure as we can we are going with this break-out Merengue song that sky-rocketed Sergios career.

In 1995 Los Hermanos Rosario put out what would be their most successful release in their music career with the album “Los Duenos del Swing”. As a lead-off single, and arguably their most known song the hit “La Duena de swing” came to be.

Fernando Villalona is an artist that is synonymous with Dominican culture, and the most known Merenguero of the land.  Nicknamed “El Mayimbe” (a moniker later also adopted by bachatero Antony Santos), Fernando is beloved by the Dominican people for his voice and many songs dedicated to the Dominican Republic such as “Dominicanso Soy” and “Cuando Pise Tierra Dominicana”. Fernando has an ample list of songs that would all fit into top 10 lists, like Carnaval, Felix Cumbe and many others.

For this particular list, we are going to go with a song that was no longer a great hit, but pays great homage to the Dominican people and culture, Fernando Villalona’s Dominicano soy.

When you talk about females in the Merengue Genre the picks are slim. The truth of it is Dominican music is more a male Dominated thing, and it has always been hard for women to reach the type of success that male merengue singers have reached, however, when you talk about Milly Quezada everything changes.

Starting out as part of Milly, Joselyn Y los vecinos, a group formed by her and family members, Milly enjoyed success later going solo and finding even greater success in her career. While hits like “Solo Contigo” are bigger than the one we are picking for this list “Volvio Juanita”, there is no denying that when merengue is brought up, Volvio Juanita will forever have a spot as one of the greats of the genre. It is for that reason, that this song is inducted into the list of the top merengue songs of all times.